Imagine accidentally stumbling across the most amazing scientific discovery. Would you tell someone about it even if it meant risking your own life?

Fortunately for us, one man’s brave decision to share his discovery with others led to profound breakthroughs in the study of mathematics. His name was Hippasus of Metapontum; a well- respected mathematician who lived in the 5 th century BC. Spending much of his time studying the Mathematica (a religious Pythagorean movement), Hippasus deduced that some lengths can only be approximated even if their exact end points are known.

What’s all the fuss about? 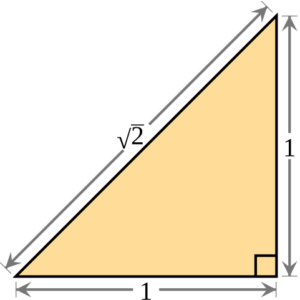 By observing any given 1 by 1 unit right angled triangle, the hypotenuse (the longest side length) can always be found using the Pythagorean Formula.

By using this ancient method, the hypotenuse can be calculated to be units long; an irrational number! This means that has an infinite number of decimal places that do not repeat in any pattern! In fact, contains every known number sequence in the universe (even your birthdate!). We can see that the length EXISTS even though it’s impossible to find it exactly.

The Pythagoreans worshiped numbers, believing everything in life could be reduced to known rational numbers like 1,2 and 3. Many could not accept Hippasus proof and felt that it threatened their religious movement, so they planned to conceal his findings from the broader society by planning his murder. Hippasus risked his life so that we can have the privilege to learn about irrational numbers and their impact on our understanding of the universe.